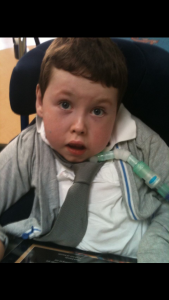 The Charlie Cookson Foundation will financially support the parents of this amazing 11 year old boy “Conor McKenzie Durkin-OBrien ”. CCF is in absolute awe of this family their sheer determination to keep their child alive is amazing. Please take a little time to read about this inspirational family our foundation is so pleased they contacted us.

Conor’s parents Julianne and Philip are both full time carers for their son, Conor also has a younger brother Cameron who absolutely adores his big brother. This inspirational family live in Liverpool, Merseyside.

Conor has complexed medical and health care needs and has a life limiting condition;

Spinal Muscular Atrophy Type 1 ( the most severe form of the disease, symptoms are present before the age of six months and these children never acquire the power, the strength, and the endurance to sit independently, to crawl, or to walk. The greatest threat to their life and limb are respiratory complications

Osteoporosis ( medical condition in which the bones become brittle and fragile from loss of tissue, typically as a result of hormonal changes, or deficiency of calcium or vitamin D)

Spasticquadraplegia (Most patients with spastic quadriplegia cannot walk and their speech may also be profoundly affected. The limbs may be extremely stiff, yet the patient’s neck may be “floppy” meaning that they have no voluntary control of it. Seizures are common in spastic quadriplegia)

The need for a Tracheostomy – Ventilated 24/7

The need for a Gastrostomy

Julianne had a normal pregnancy and normal birth, it wasn’t until Conor was around 6 weeks old that they noticed his breathing became irregular and he was very floppy, they took Conor to their GP who dismissed their worries. Julianne and Phillip became more and more concerned so they decided to take Conor to their local hospital “Whiston Hospital” in Liverpool. Conor’s Mam says “looking back it all seems like a haze” Conor was referred to a Neurologist and blood tests were carried out and they lived off their nerves until the results came back.

His Mam and Dad refused to listen to this, they looked at their beautiful baby boy and were determined to give him the best chance of life they could possibly give him, the Doctors did not agree! They said there was nothing they could do for Conor. Julianne and Philip did a lot of research and found a Doctor in America that was willing to meet with them, they raised the money to fly over to America and this Doctor gave them the news they wanted to here “Your son can be supported throughout this condition, with ventilation and the right care it is very likely he will live a longer life than what has been predicted”

Immediately they began to fund raise for Conor to have this support as their local hospital refused to provide the “life saving “equipment that Conor so desperately needed. They raised an amazing £18,000 for a ventilator and a saturations monitor; they were given a half hour training session when it arrived and a manual! Their love and sheer determination to keep their little boy alive is truly amazing.

Conor was doing ok during his first year, he was eating normally and gaining weight and using his ventilator overnight, he had one bout of sickness when he was 6 months old which required hospitalisation, he had a temporary feeding tube inserted and needed small amounts of oxygen to get through each day. Despite all this he just kept smiling, a smile his Mam and Dad were told they would not see for very long.

After a huge milestone “Conors 1st birthday” he became extremely unwell and was rushed to Children’s Intensive Care at Alderhey Hospital. He was sedated and had a breathing tube inserted and was put on a life support machine. They were told to expect the worse, during Conor’s admission in PICU he stopped breathing on numerous occasions and his parents were asked many times if they wanted to continue treatment or let Conor go! They never lost faith in their child, they could still see him smiling and refused to let him go, they knew he was going to prove everyone wrong.

Doctors tried and failed to take Conor off the ventilator numerous times but each time he would crash and have to be incubated again and put back on the ventilator. At this point his Mam and Dad felt helpless, they did not know what to do or where to turn to for help and advice. At this point Conor’s parents met a doctor who was willing to listen and ensure that Conor had the best treatment and management of his condition. They managed to convince this doctor to consult with the SMA specialist in America. He was given advice on the best treatment methods and followed his extubation protocol. After 5 unsuccessful attempts of getting Conor off the life support machine they finally succeeded and Conor was well enough to go back on his own ventilator on his own settings. By the time Conor was 2 years old he had spent a great deal of time in intensive care.

A couple of months later he had to have a feeding tube fitted as he had lost the ability to swallow and food was going directly into his lungs. Despite having the feeding tube Conor kept refluxing his milk which then went into his lungs and caused a chest infection. To stop this from happening Conor had a procedure to tie the top of his stomach.

At the age of 3, Conor had deteriorated to the point where he was requiring 24/7 ventilation. He used to stop breathing quite a lot which required regular resuscitation. He basically had no quality of life as he was confined to a hospital bed with a mask strapped to his face. Because of this a decision was made to give Conor a Tracheostomy. Parents were trained up in all aspects of Conor’s care i.e. How to change the tube weekly, how to do the dressings daily, how to suction regularly and what to do in an emergency. Once they learned all this they were finally able to take their special boy home where this amazing family began a life they tried to call their “norm”

8 years on and they have made Conor’s life the best they possibly can, their family has grown with the addition of Conor’s little brother but it is certainly not an easy life for them all. They have carers living with them most of the day and night as there always has to be one parent and one carer with Conor. “It’s a strange feeling and an invasion of our privacy having someone in your house sometimes we feel like we have joint custody of our son, this lifestyle rubs off on our younger son Cameron who asks when will someone come to look after him? So sad but we do what we have to do” Conor’s Mam

Conor needs regular turning sometimes every half hour as he is currently suffering a lot from pressure sores, he is has been admitted to hospital today as he has no quality of life at the moment owed to him being in so much pain in his chair, he is only free from some pain whilst lying in his bed. The Doctors are hoping to get on top of his pain by prescribing morphine, they are praying it isn’t a long admission.

Conor relies 100% on his ventilator if he is disconnected from this machine they have to us a Ambu Bag to breath for him, he is unable to swallow so he needs regular suction to clear his mouth and need a lot of physio to clear the secretions from his tracheostomy. He is paralysed, he is unable to hold his head up or sit unaided , this means that he requires a lot of repositioning throughout the day and night, sometimes every 20 minutes. Conor is fed through his peg in stomach and all his medication is administered this way.

“He is our fighter a true warrior and I have learned so much from this little man and I hope that having him in my life has made me a better person. Without his ventilator. Tracheostomy, feeding tube and other pieces of live saving equipment we would not have just celebrated his 11th birthday!” Conor’s Mam

Along with all of this worry, this family has had another devastating blow to their daily life, Julianne has been diagnosed with uncontrollable epilepsy. This was such a shock to them all when Julianne suffered a fit on New Year’s Eve, and has added a lot more strain to their already stressful lives. Julianne is the only driver in the family; her recent diagnosis has resulted in her not being able to drive. They have not been able to afford for Conor’s Dad to pay for driving lessons, with our help they now have the spare cash to get Philip through his lessons and test to give them back the little freedom they have.

All of the CCF Trustee’s immediately had huge admiration for this family, it is our pleasure to relieve them of their financial worries for a period of three months. I know you will all agree that they deserve a break! We all think you are truly inspirational.